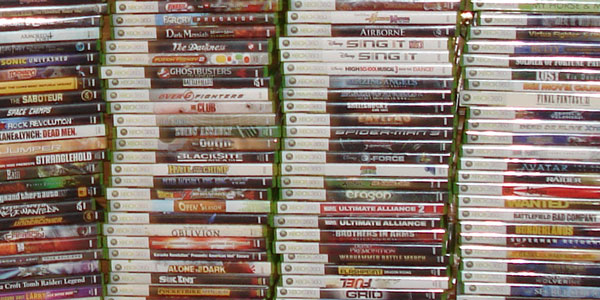 Today we have access to more gaming content than ever before. Sales, bundles, freebies, and subscription services add games to our collections faster than we can play them, and it’s hard to keep track of how many games we own. We have more games than we know what to do with, but… how many do we have exactly?

AllMyGames makes it easy for us to estimate how many games we have. By linking our Steam, GOG, Xbox, and PlayStation accounts, we can import all the games we’ve played on these platforms, then fill in the gaps by adding games from other platforms (including Nintendo consoles, retro consoles, and other PC providers such as Battle.net and Twitch) using the manual search feature.

In this way we can determine how many games we have, but a much more important questions remains unanswered.

Is that a lot?

To help answer this question, I retrieved the total game counts for users on AllMyGames so that we can get a sense of the distribution of game library sizes. I’ve excluded data for users with fewer than 3 games with the expectation that most such users hadn’t yet imported a significant portion of their library. Though somewhat arbitrary, this seemed like the most reasonable cut-off point when looking at the data. 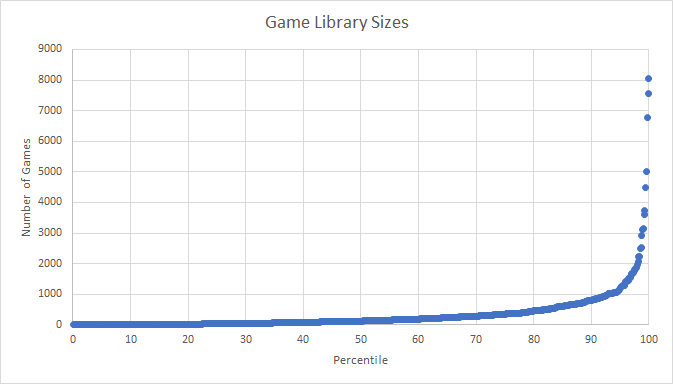 Turns out that those with the most games have a LOT more games! Our graph looks like a hockey stick, with a sharp upward turn around the 95th percentile. This makes it difficult to see the increase in game library sizes up until that point. Let’s look at a different version of this same graph using a logarithmic scale for the number of games. (Note that the values on the Y axis no longer scale linearly, but rather increase by a factor of 10 at each line.)

The median user on AllMyGames has 122 games. (Half of all users have fewer than 122 games, while the other half have 122 games or more.) The mean (average) number of games per user is 330; this is larger than the median number of games because the users with the most games have a LOT more games.

The distribution of game library sizes on AllMyGames is always changing. As more users sign up and existing users add more of their games, our data will become more representative of the larger gaming community. You can see how the size of your library stacks up at any time by visiting your Stats page to see how your total number of games compares to the rest of the community represented as a percentile.